WisdomTree Investments (NASDAQ:WETF – Get Rating) is expected to report results before market open on Friday, April 29. Analysts expect the company to report earnings of $0.08 per share for the quarter. Those interested in participating in the company’s earnings conference call can do so using this link.

WisdomTree Investments (NASDAQ:WETF – Get Rating) last released its results on Friday, January 28. The asset manager reported earnings per share (EPS) of $0.20 for the quarter, beating the consensus estimate of $0.18 by $0.02. The company posted revenue of $79.20 million in the quarter, compared to analysts’ expectations of $78.62 million. WisdomTree Investments posted a net margin of 16.18% and a return on equity of 23.10%. The company’s revenue for the quarter increased by 18.0% compared to the same quarter last year. During the same period of the previous year, the company made earnings per share of $0.12. On average, analysts expect WisdomTree Investments to post EPS of $0 for the current fiscal year and EPS of $0 for the next fiscal year.

In other news, CEO Jonathan L. Steinberg sold 153,913 shares of the company in a trade that took place on Tuesday, February 15. The shares were sold at an average price of $5.87, for a total transaction of $903,469.31. The transaction was disclosed in a legal filing with the Securities & Exchange Commission, which is available via this hyperlink. 8.00% of the shares are held by insiders. 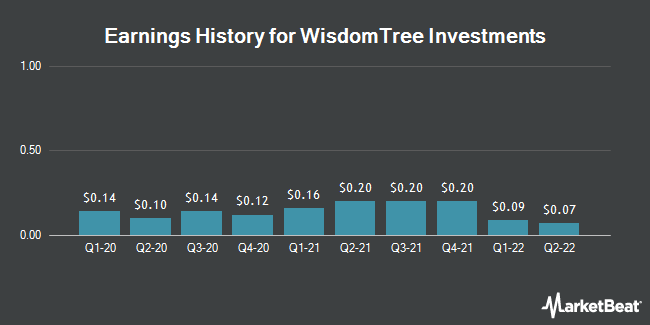 MarketBeat tracks daily the highest rated and most successful research analysts on Wall Street and the stocks they recommend to their clients. MarketBeat has identified the five stocks that top analysts are quietly whispering to their clients to buy now before the market takes off…and WisdomTree Investments was not on the list.